The (hi)story of Sinterklaas and how to celebrate it yourself

The temporary intensification of measures that were in effect for the last 2 weeks has been revoked again. This means that our partial lockdown continues and that we can receive up to 3 people at home and be with 4 people outside. Now we know that this is excellent news with the Christmas holidays coming up, but let’s not forget about the most fun Dutch tradition of the year first – Sinterklaas!
Social
Living in the Netherlands 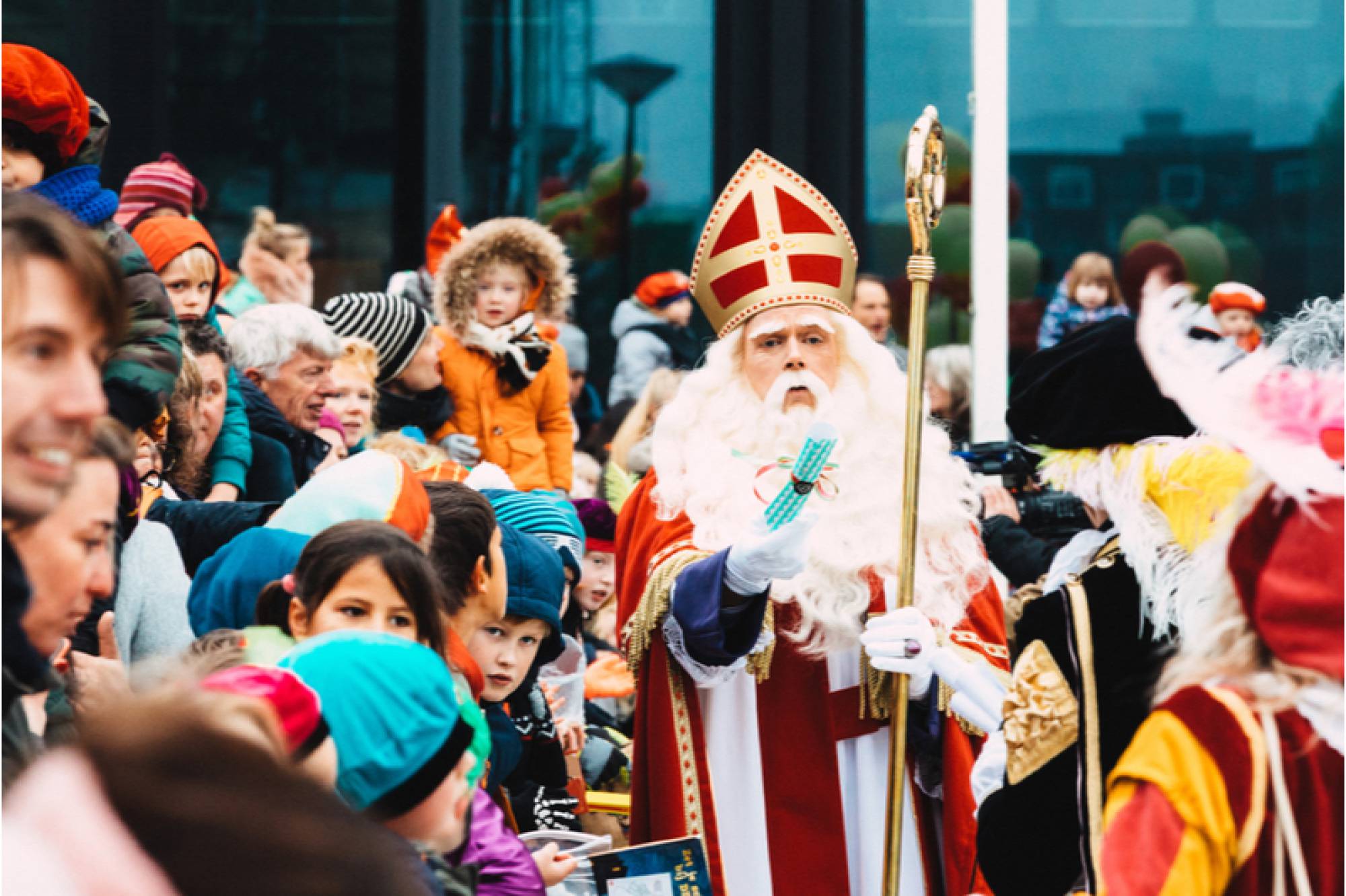 Let us bite the bullet right away, yes there’s a lot of controversy around Sinterklaas, especially around his helpers – the Zwarte Pieten (Black Piets). The fact that they’re helpers depicted with exaggerated black features has indeed racist connotations. Whether this is intentional or whether children interpret it this way? I don’t know, at least I didn’t during my time as a child. In fact, I liked Zwarte Pieten, because they were the ones handing out candy and doing cool acrobatic tricks. It was Sinterklaas who scared me.

As the story goes, Sinterklaas hears every bad thing that children do throughout the year, which he notes in his Book so he can judge every child by the end of the year. Did you behave well? You’ll get rewarded with candy and presents. Did you behave badly? Then, depending on the severity of your behavior, Sinterklaas might give you salt, order Zwarte Piet to whip you with a cane, or even have you put in one of the gunny bags used to carry candy and presents around to take you back to Spain.

Embrace the fun of it

Now of course none of these latter repercussions actually ever happened to me, or anyone else that I know for that matter, but stories are powerful enough to instill fear by themselves. Now, this is just a little detour to say that you don’t have to do anything with Zwarte Piet as adults. In fact, depictions of both Sinterklaas and Zwarte Piet have changed much over the years (depending on their historical contexts), and will likely continue to do so.

Most adult Sinterklaas celebrations consist of drawing a ticket that contains the name of the person that you need to get a small present for. Usually, there is a limit on the amount to be spent on presents (max €10 - €20), because really, the present is a bonus – Sinterklaas is all about the surprise and/or poem that you pack it with!

What does that mean, surprises and poems? Well, a surprise (pronounced the French way) can be anything, as long as you make it yourself: a grab bag with a dirty smudge that you hide the present in, a puzzle or search quest that gives access to the present, or some artefact that you associate with the person that you got a present for. The rule is, the more personal, ridiculous, or clever – the better.

Now as you might guess by now, we’re not talking about love or other deeply emotional poems here; we’re talking about a rhyming letter aimed at having a good laugh together. Of course, it can be loving or very emotional too, but Sinterklaas is more about fun than about anything else. Besides that, the same rules as with the surprise apply: write your own poem, and don’t hold back on making it embarrassingly personal, ridiculous, or clever!

The (hi)story of Sinterklaas

So, Sinterklaas indeed looks a little bit like Santa, but where did this weird Dutch tradition that’s been celebrated over 7 centuries come from?

To begin, Sinterklaas or Sint-Nicolaas (Saint Nicholas) was a real person who did religious work in Turkey during the 4th century. Although initially only honored in Eastern Europe and Russia, Sint-Nicolaas’ status as protector of sailors and merchants made him popular in the West European seafaring nations too. He even became the patron saint of over 70 churches in the Netherlands, and of places such as Amsterdam, Kampen, Edam, and Valkenswaard. In Amsterdam, you can still visit the impressive Basilica of Sint-Nicolaas church, which is featured right in front of the central station.

From the 13th century onward, his official name day was set on December 6th, after which various European places started celebrating Sinterklaas in their own way. Folklores of Sint-Nicolaas as protector of unmarried women led to a Dutch tradition of sending love letters that lasted until the early 20th century. Overtime, Sinterklaas increasingly became a tradition dedicated toward children, during which his image changed from a disciplining pedagogue to a protective children’s friend – all in line with cultural ideas of children’s education.

Initially, presents would be left by Sinterklaas on the morning of 6 December, but in order to facilitate more of a cosy family celebration, the tradition was moved to the evening of 5 December – Pakjesavond (packages evening). Adults would receive Speculaaspoppen that depicted how other people thought of them. This is probably where our contemporary use of personalized surprises and poems comes from.

Halfway the 18th century, the Sinterklaas myth changed, for he now travelled from Spain to the Netherlands by steamboat and he would return on December 6 by hot air balloon (but sadly that tradition didn’t stick around). In addition, Sinterklaas became a “real” person played by people dedicated to dressing up in his outfit, instead of just a mythical folklore person that people would never actually see in real life.

How to celebrate Sinterklaas

Now there is tons of more history and folklore around the Sinterklaas celebration. However, all you need to celebrate it yourself is getting a few people to draw tickets with (you can easily do this online). You don’t even have to be with your family, celebrating Sinterklaas with friends, classmates or at a (sports) club is also very common. Then, you get a small present and work your magic on a surprise and/or poem! Don’t know how to start? Think of a typical habit, event, or way of speaking that you associate with the receiver of your present, and start from there.

Ps. Don’t forget to get some of those delicious Sinterklaas cookies and candy, or have a go at making your own if you’re feeling creative (your house will smell nice too, guaranteed)!